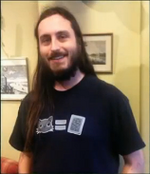 Ryan Holtz is a game developer at Mojang AB currently working on the rendering engine of Minecraft. His employment at Mojang was announced on November 2, 2013 at the "Future of Minecraft" panel at MineCon 2013.[12] His first day at the Mojang office was November 18, 2013.[13]

Holtz is from Buffalo, New York.[14] In his early teens, he was diagnosed with autism. He says he "technically [has] "Autism Level 1" according to the DSM-V, which is the new name for Asperger's."[15]

Holtz is a graduate of East Tennessee State University in computer science,[1] who has been involved in the video game industry since 2005.[12] He started his career at EA Tiburon working on Superman Returns then later for Activision at Vicarious Visions working on the Guitar Hero series.[1][16]

Holtz is well known for his Minecraft mods which he posted on the Minecraft Forums under the name UltraMoogleMan. His modding lead to talks with Markus Persson about the implications of increasing Minecraft's then world height of 128.[17]